5 Steps To Get More Musicians And Vocalists (Part 2)

Today we’re continuing our series on how to get more musicians and vocalists for your team! Last week I talked about creating a culture where people are free to leave.  If that sounds crazy to you, you have to read that post first. And even if you haven’t read that one, I suggest you do it before reading this post so you can have a better idea of exactly what we’re talking about! Now on to the good stuff! 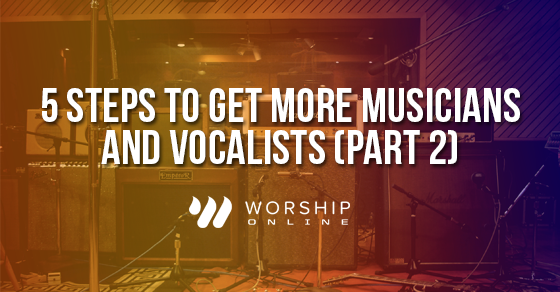 Every worship team wants…no, needs more musicians and vocalists for their team. So how do we get them? I really think that today’s post is going to flip on some light bulbs in people’s heads and launch a lot of teams forward. So let’s jump in!

Start from the beginning. What is your process?

By “process,” I mean the clearly defined steps that every new team member goes through to join the team. Say someone wants to join your worship team. Here’s an example:

These are the steps that every new team member goes through. Obviously this is an example and should be tweaked to fit your church and your team.

So what are the steps for your team? Can you list them? Can EVERYONE on your team list them? My guess is that, for most of us, the answer to this is no. We could probably come up with something, but it’s likely that it’s pretty vague.

Can you imagine how many people fall through the cracks when we don’t have a clearly defined process? Say someone tells one of your guitarists that he’d like to join the team. If you don’t have a clearly defined process, he’ll probably tell that person they need to talk to you, or one of the other leaders. That person probably never does, and poof…they are gone forever. Ok not really, but they never join the team.

…As opposed to having a clearly defined process, where (in the case of my example) your guitar player gets them a form and even walks them through filling it out. Now this person not only begins the process and is not lost along the way, but now their first impression of your team is good one – as opposed to a chaotic mess.

Then as you continue to efficiently funnel them through the process, they get to see that you’ve really got your stuff together, and the bar for excellence is set.

The process has the potential to bring your entire team to the next level! Anybody in business can tell you that if there is no process, or a weak one, your product suffers and you’ll eventually go out of business.

If there’s one suggestion I can give you about your process, it’s to keep it simple. I think of this in terms of designing a website. A good web designer knows that EVERYTHING should be only 2 clicks away no matter where you are. Keep your process simple and make sure that everyone on your team knows exactly what it is. What good is a process that only you know?

And one last thing before I wrap this up; don’t be afraid to announce worship team tryouts to the church…even if you don’t have any people scheduled for the tryout. This is a way to get people to sign up for it. The same way the pastor asks the church to bow their heads and raise your hand if you want to commit your life to Jesus, and then says “thank you, I see your hand”  …even though no one was raising their hand.

It’s called social proof. Sometimes people just need to know (or THINK) someone else is doing something before they will.

Does your team have a process? Share it below in the comments!

Read Part 3: How To Actually KEEP Team Members You Recruit