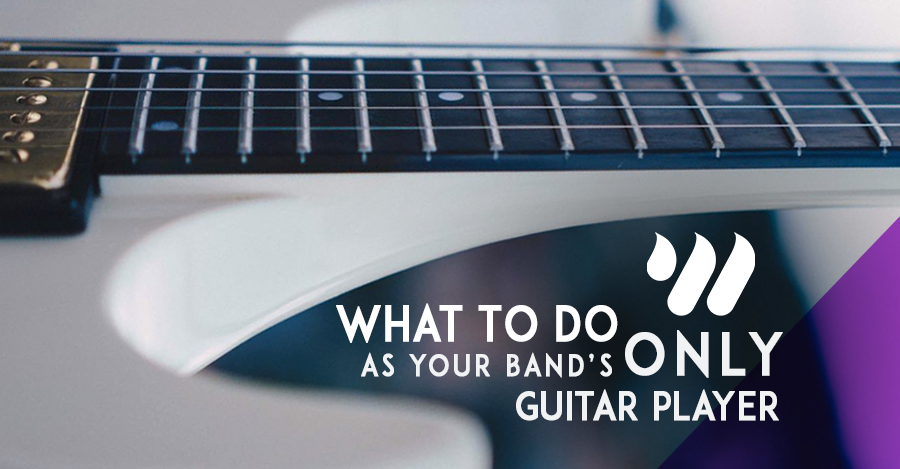 At Worship Online, we split our electric guitar tutorials into electric 1 and electric 2 parts. Because of that, a very common question we get is, “What do I do If I’m my band’s only electric guitar player?”

Many of us don’t have the liberty of having 10 guitar players ready to go every week. I definitely know the struggle. I have probably been the only electric guitar player in the band more often than not.

So how do we account for all of the parts, leads, and riffs in these songs with only 1 electric guitar player? Let’s start here:

A general rule of thumb I like to follow is to play rhythm parts. What I mean by “rhythm parts,” are parts that fill up the mix of your band. Something more than just single notes or lead lines. This usually includes big open chords or some higher up 2 or 3 notes chord inversions.

In smaller bands, the responsibility to keep the band sounding full with what you have is a big one.

Bands with multiple electric guitar players have the liberty of playing more lead lines and single note parts. This is because at least one guitar player should be helping fill up the mix with with some rhythm parts.

Now with that said, there are exceptions to this rule. Whether you follow this rule or not is completely dependent on your band. So you have to USE YOUR EARS and listen to the band. Listen to how well the the other instruments are filling up the mix. Then listen to what you can or should add.

If the other instruments (or tracks) are doing a good job of keeping the mix full, then you are free to play more lead lines, because the band isn’t going to suffer without your rhythm part. This definitely doesn’t mean that you should only play lead parts and forsake all rhythm. It just means that you have a little more liberty with the parts you play.

A band I think that does a really great job at filling up a mix without electric guitars is Bethel Worship. They typically have a keyboard player playing some really thick pads and a bass player using some grit or overdrive. (Adding a bit of grit/overdrive to a bass guitar can really fill up a mix).

Because the band sounds so full already, the electric guitar players are free to be creative to their heart’s content. Pretty often, you’ll find both Bethel guitar players playing a lead part at the same time.

So it’s important to really listen to what your band needs. My heart breaks when I see a guitar player shredding away a solo or playing some lead line while the band sounds flat and empty. Playing with a band is a completely different skill than playing alone.

Sadly, I see too many guitar players that are great at shredding away on their own, but don’t know the first thing about playing with a band as a team.

For some guitar players, this may mean humbling yourself a little to play what the band needs and not what you need.

Play what works best for you and your band

We’re going to teach you those hard to hear lead parts that enhance the song, but are buried in the mix of a song. And we’re also going to show you all of the main lead and rhythm parts. This is all in the name of teaching you exactly how it’s played on the album. No more, no less.

We’re not going to forsake teaching some really cool riffs because a lot of bands only have 1 electric guitar player. You may play that part, and you may not. Again, it’s completely dependent on your band.

I expect as that if you’re your bands only electric guitar player, you’ll be going back and forth playing a mix of both lead and rhythm parts.

Lastly, if you take away one thing from this post, it’s to use your ears. Always be listening to the band. It’s easy to get tunnel vision and only focus on what you’re playing. We forget that the band sounding good, not just ourselves, is the goal!

Are you your bands only electric guitar player, if so, how do you go about picking the parts that you play? Let us know in the comments below!